If you like the idea of Christmas in Scotland, love dogs, castles, and damaged characters who find their happily-ever-after this new continuity is for you.

It all takes place at Heatherglen Castle that has been turned into a physical therapy clinic that specializes in pet therapy as part of the recovery. In conjunction with the clinic is a veterinary clinic on the estate that cares for the dogs and a staff that trains them.

Annie Claydon, Annie O’Neil and Karin Baine and I make up the authors of the continuity. I had the honor of writing the first book. (No pressure there!) Below you will find an excerpt from my book Highland Doc’s Christmas Rescue. It will be out on November 1.

Look for more excerpts from the other books in the near future.

Warning: In these books there is snow on the ground, Christmas in the air and love to be found at Heatherglen Castle Clinic. 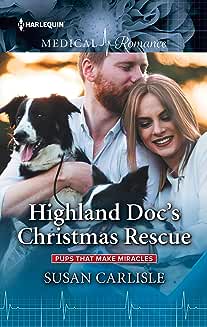 AS THE TAXI rolled up the rise Cass Bellow looked out the window at the snow-blanketed Heatherglen Castle Clinic in northern Scotland. Why had she been sent here?
MORE THAN ONCE she’d questioned her doctor’s wisdom in transferring her to this private clinic for physical therapy. Weren’t there plenty of other places in warmer climates? Particularly in her native US. Or, better yet, couldn’t she have just gone home and handled what needed doing on her own? But, no, her doctor insisted she should be at Heatherglen. Had stated that he sent all his patients with extensive orthopedic injuries there. He declared the place was her best hope for a full recovery. Finally, at her argument, he’d bluntly told her that if she wanted him to sign off on her release she must complete her physical therapy at Heatherglen.
As the car came to a stop at the front door she studied the Norman architecture of the building with its smooth stone walls and slate roof. The place was huge, and breathtaking. There were more chimneys than Cass had a chance to count. This place was nothing like what she’d expected. Though it was early November, festive Christmas wreaths made of greenery and red bows already hung on the outside of the lower floor windows. They further darkened her mood.
When she had been given the search and rescue assignment assisting the military after an explosion in Eastern Europe, she had never dreamed she’d end up in traction in an army hospital on a base in Germany. Her shattered arm and leg had finally mended, but she needed physical therapy to regain complete use of them. Now she’d been sent to this far-flung, snowy place to do just that. All she really wanted was to be left alone.
She opened the cab door and wind blasted her. Despite the heat coming from the still running car, she shuddered. As Cass stepped out, one of the large wooden castle doors, decked with a huge Christmas wreath full of red berries, opened. A tall man, perhaps in his mid-thirties, with the wide shoulders of an athlete stepped out. With rust-colored hair and wearing a heavy tan cable sweater and dark brown pants, he looked like the epitome of what she thought a Scottish man should be. As he came down the few steps toward her, he smiled.
“Hello, you must be Ms. Cassandra Bellow. I’m Dr. Lyle Sinclair, the medical director here at Heatherglen. You may call me Lyle.”
His thick Scottish brogue confirmed her earlier thoughts. Yet she was surprised by the way the sunny cheerfulness of his voice curled around her name, nudging at her icy emotions. Irritated, she pushed that odd notion away. This doctor was far too happy and personable for her taste. Her goal was to do what must be done with as little interaction with others as possible. She planned on nursing her wounds in private.
“Yes, that’s me.” To her satisfaction her flat, dry tone dropped the brightness of his smile a notch. If she could just get to her room and collapse she’d be happy. Her right side was burning from the ache in her arm and the agony of putting her full weight on her right leg.
“Flora McNeith, the physiotherapist whose care you’ll be under, couldn’t be here to greet you and asked that I get you settled in.” Concern filled his face. “Do you need a wheelchair? Crutches?”
“No, I can walk on my own. Run, that’s another thing.” She pulled at her jacket to stop the biting flow of air down her neck.
A light chuckle rolled out of his throat and over her nerve endings. “I understand. Then let’s get inside out of this weather.” He looked up at the sky. A snowflake landed on the dark red five o’clock shadow covering his cheek.
Cass averted her eyes and gave the cobblestone drive, cleared of snow, a searching look. It was farther than she wanted to walk, yet she wouldn’t let on. The three steps up to the door looked even more daunting.
All she needed was fortitude to make the walk and climb those steps. She had plenty of that. Soft snowflakes continued to drift down as she took a deep breath and steeled herself to put one foot in front of the other. With another silent inhalation, she started toward the entrance. Dr. Sinclair walked beside her.
She managed the first two steps with no mishap but the toe of her short boot caught the edge of the last one. Grabbing at air, Cass finally found the fabric covering Dr. Sinclair’s arm. She yelped with the effort to hold on. Being right-handed, she’d instinctively flailed out that arm and immediately regretted it. Pain shot through it, but not as sharp as it had been weeks earlier. She gritted her teeth, thrusting out her other arm to ease the fall.
Instead of tumbling onto the steps, her body was brought against a hard wall of human torso. The doctor’s arm circled her waist and held her steady. Her face smashed into thick yarn. A hint of pine and smoke filled her nose. For some reason it was reassuring.
“Steady on, I’ve got you.” His deep burr was near her ear.
Cass quickly straightened, getting her feet under her even though pain rocked her. She refused to show it, having already embarrassed herself enough. Her lips tightened. “I’m fine. Thank you.”
Glancing at him, she got the weirdest impression that the concern in his eyes had nothing to do with her physical injuries, as if he was able to see her true pain. That was a crazy idea. She shook that odd thought off and focused on where she was.
Taking a third fortifying breath, Cass stepped into the massive foyer.
No way was she going to let him see the effort it took to keep walking. She’d lived through much worse.

View all posts by susancarlisle1