Back in January, we had some unseasonably warm weather in my part of the world. We had a lengthy thaw, and my tulip tree decided to put out some buds. Bad choice. The poor thing was set straight a few weeks later when things turned icy.

Fast forward to May. So the rule here is to wait to plant until after Mother’s Day. But the weather turned warm again two weeks before then, so I decided to chance it. Well, just like my tulip tree, that was a bad choice.

I planted some veggies in a raised bed and then heard we were going to get a deep freeze. Not just a light frost, but a frigid blast. So I scrambled and put together a row cover with PVC pipes and greenhouse plastic. The freeze came and those plants… well the tomatoes and peppers didn’t fare well at all. They were done. So were some of the flowers I’d planted in my front bed. My husband, who’s from this part of the world, didn’t say “I told you so,” to his credit. Maybe he feared for his life. 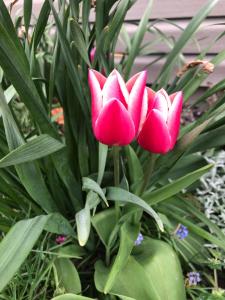 But I’ve regrouped and replanted (after Mother’s Day, this time), and Spring has finally decided that it’s okay to appear, for which I’m thankful. After thirteen years of living here, I’m still not quite used to long winters, but I have come to appreciate Spring. Especially the tulips, in several colors, which come back year after year.

How about you? Any hard and fast rules about planting in your part of the world? Have you ever blown it, like I did?

A three-time Golden Heart® finalist, Tina Beckett writes contemporary medical romances for Harlequin Mills & Boon as well as single title romantic suspense for Carina Press. When not in the middle of her latest book, Tina enjoys crafting stained glass panels, riding horses and hiking with her family. Fluent in Portuguese, she divides her time between Brazil and the United States and loves to use exotic locales as the backdrop for many of her stories. You can learn more about Tina at her website: http://www.tinabeckett.com or find her hanging out on Facebook or twitter. View all posts by tinabeckett